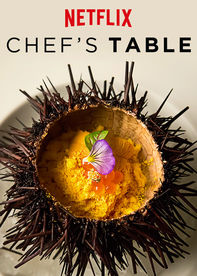 I started watching Chef’s Table because of the “cover” art—a beautifully constructed and impossibly tiny dish of food. Like many Americans, I’ve become enraptured in our recent conception of food as art and this show seemed like the culmination (or at least a new level) of that art. What I didn’t realize is how much I’d learn from this show about our culture of genius worship and how that translates to the characters we seek out in fiction, nonfiction, and life.

There are many sides to the genius character and his narrative, and it surprised me how neatly each of these chefs fit into the categories (or how neatly they were edited into them anyway).

I still thought I was watching a cooking show when Massimo Battura showed up on screen in the first episode. Although the voice of a food critic had already been introduced to help me understand that this man was special. We see him in the kitchen of his restaurant, Osteria Francescana in Modena, Italy. We see him in the market gathering the best ingredients. We see him in the fields chatting with farmers. But it isn’t until we meet his wife, Lara Gilmore, that we really get to know Massimo. Because she is literally interpreting his actions for the people around them. Don’t get me wrong, their relationship is actually very charming and their love for each other is palpable, but it is their very closeness that highlights how far the rest of the world is from understanding him. At one point, I’d swear Bottura admits that he’d be nothing without her explaining his vision to others.

Bottura is the classic misunderstood genius. Filled with ideas too big for his small town, he has to travel to New York and then Paris to get recognized. He comes home with even bigger, more refined ideas and then he’s really too obscure for those at home who just want their Italian food the way it’s been cooked for thousands of years. A critic comes in and demolishes him. Finally, at long last, an even bigger critic comes in and sees the genius of the man.

Doesn’t sound too bad, does it? In some ways it’s what we all strive for—to be extraordinary and to have the world finally recognize it. You get the feeling that the world will never fully understand Bottura, but once we accept that he’s beyond us, we can worship at his feet and trust in his genius (now that it’s been recognized if not fully understood). In fact, he might lose some of his charm if we did understand him. He might become more like one of us.

I didn’t understand what rankled me about environmentalist/chef Dan Barber until my husband started talking about him. The man, at least as edited for this series, comes off as a condescending prick. See, he knows things about food and the land that the rest of us are failing to see. He wants to educate us through his food (at two restaurants named Blue Hill in New England) and to help us save the world by eating good ingredients that are actually in season and good for the earth.

I can’t disagree with his basic premise, what tastes best about a strawberry in January is the memory of strawberries past, not the greenhouse grown, artificially huge one in front of you. But the way that Barber positions himself as a preeminent thinker (espousing ideas that got lost somewhere between my great-grandparents and me) drives me nuts. And I think it’s because I’m preconditioned to want to be this type of genius‐so I want to take down others I see as false.

It wasn’t until my husband remarked on how awful he was to the people around him that I realized both the fault in Dan Barber and how closely it relates to my worst days.

The most beguiling genius of the series so far is Francis Mallmann—Patagonian-raised, French-educated. When I saw him make a panqueque con dulce de leche over open flame on an island surrounded by snow-capped peaks hundreds of miles from anywhere, I nearly bought a plane ticket.

Mallmann’s narrative focuses very much on him as a restless loner. It’s the only episode where we barely see the inside of a restaurant. The mother of his youngest child lives a country away and they see each other for maybe ten days a month. He espouses the open relationship and likes his freedom. But there are holes in this narrative, because out on La Isla (yes, I love the name of his island), he’s surrounded by acolytes. And it seems that he never actually stays out in that paradise of “isolation” for more than a few days at a time. Mallmann is a loner, but he is never alone. Because what is genius in isolation?

By far the most beautiful of the episodes of Chef’s Table, I wrestled with the distance between the image of his life and the actualities and this is the episode that got me thinking I need to write about this series. I needed to understand what was the call of these geniuses. I needed to know if their lives were really what I should strive for.

Niki Nakayama is the first female chef to be featured in the series. So why did I put her under the title “The Masculine”? It’s because in the world of genius (and even much more so in the world of chefs), the true genius is expected to be male. Nakayama has fought against that perception, but very quietly. She comes from a patriarchal family (her brother was supposed to succeed, they let her play at chef to get it out of her system) and was educated under sexist conditions (every one of her mentors, even the proudest, is still a little shocked that she’s a woman). There’s even stories of people walking out of her restaurant when they find out that the chef is a woman.

So what does Nakayama do? She closes the shoji screens and cooks quietly in the background. According to the critic assigned to her episode, she is no less of a genius chef than any man, but she fits outside the narrative enough to actually highlight how constrictive our expectations of greatness are.

The Cult of Genius

What I found interesting about each of these four types of genius is that each of these people actually has all of the characteristics to some degree. Nakayama is deeply misunderstood, Bottura is an intellectual, Mallmann fits a wide range of male stereotypes. It made me wonder if there are actually different types of genus, or if there is one archetype sitting atop a mountain that we’re striving for.

I also began to wonder why we’re striving to be at the top of that mountain and if we should be. There is great joy in the lives of some of these chefs (especially Bottura and Nakayama) but there also appears to be great pain either in getting where they are or in staying there. And there are so many people working with and for them who will never achieve those heights. Are we creating a culture of Captain Kirks when we really need are more Uhuras, Boneses, and Scotties?

The Genius in Literature

And of course the genius ties in so closely to literature. Our archetypal hero (and writer for that matter) is so often this brilliant, misunderstood loner—so beguiling, so out of touch with the world. He’s a godlike figure we strive to get to know even when he cannot know himself. Why do we worship this?

My Family, My Son

I was raised in a family of geniuses. Brilliant, highly educated parents, aunts, and uncles. Even more brilliant cousins and siblings. Our intellect and superiority was cultivated and honed (often at the expense of our emotions and communication skills). I like this world. I like the idea of mastering something and using that to express what’s deep in my soul. But I wonder, too, if that expression would feel even better, more natural, if it wasn’t such torture to access it and then express it. Could I be satisfied with good enough?

It’s something I think about more and more as my son’s due date approaches. I hope he’s brilliant and creative. But most of all I hope he’s happy and fulfilled. I wrestle with what happens if he decides that frying potatoes is his highest ambition and he gets really good at it, but I also think I’d envy some of that inward looking satisfaction.

I’m going to go eat some strawberries from my back yard now (Barber sank in a little), but I’d love to hear your thoughts on genius below.