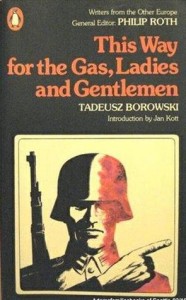 In terms of historical importance, little more can be said of This Way for the Gas, Ladies and Gentlemen. It, like Night, is a testament to the Nazis’ atrocities at Auschwitz. While contemporary novels wink at us with wit and an ironic tone, Tadeusz Borowski’s work floats above like a wise parent whose wrenching past overwhelms the smallness of our daily distractions and grievances. To say it’s one of the most valuable books of the twentieth century is a meager compliment.

How Borowski Came to Write This Way for the Gas, Ladies and Gentlemen

In 1943, Borowski was arrested for participating in the underground education in Poland, a network of students and professors who privately continued university studies despite the Nazis ban on secondary schooling. Education had been outlawed in an effort to dumb down and enslave the Poles. Borowski was taken to Auschwitz where he worked as a laborer, unloading the cattle cars and other tasks assigned to him. He, already a journalism student, documented his experience, but this book isn’t just a memoir of events by a well-meaning but clumsy writer. It’s brilliant for its craft as well.

Discovering the Meaning in the Details

Borowski renders the inhumane events he witnessed with a removed, sometimes cynical, tone. This seems to be an act of self-preservation, compartmentalizing the horror in order to preserve his sanity and therefore his life. And so, his commentary is in how he chooses to portray what he sees. For instance, Tadek, Borowski’s literary self, describes a young German guard as having “corn coloured hair and dreamy blue eyes.” This creates a chilling portrait of the guard when the guard sells Tadek’s co-laborer a drink of water. Borowski notes the railway station is “surrounded by trees” and “a cheerful little station, very much like any other provincial railway stop,” and therefore, contrasts the regular outside world with the unspeakably violent one inside Auschwitz’s gates. By stringing together events like, “They throw her on the truck on top of the corpses. She will burn alive along with them,” and then opening the next paragraph: “The evening has come, cool and clear. The stars are out. We lie against the rails. It is incredibly quiet,” we understand in achingly vivid terms how the only solace these survivors have in the hellish world of Auschwitz are the moments of rest and cool air in between the exterminations.

Similarly in the story, “The People Who Walked On,” we see Tadek playing goalkeeper in a soccer game and how in between two throw-ins, three thousand people are put to death. When he runs to retrieve a ball, he catches sight of the newly arrived train: “People were emerging from the cattle cars … bright splashes of colour. The women were … already wearing summer dresses. The men had taken off their coats, and their white shirts stood out sharply against the green of the trees…” Later, when he runs back to retrieve the ball again, the ramp is empty: “Out of the whole colourful procession, not one person remained.” Borowski’s choice to describe how beautiful the crowd looked in the warm evening starkly lays out for us the price of life that was lost and how, when the train ramp is empty, the sublimity of their humanity has been annihilated by the Nazi’s efficient, organized terror that leaves no one behind.

At the war’s end, the Allies arrive and liberation is clear. But Borowski frames the story as one about revenge, rather than rescue. There are no melodramatic descriptions of the Allies arriving or the Nazis fleeing, only a brief tale about how the prisoners hid “our man,” presumably an S.S. officer or guard, while the American soldiers spoke to him in a larger group about upholding the law, then pulled him out and beat him to death. It’s an exemplary case of how straight depiction is far more powerful than editorializing.

How to Write After Reading Such Strength

Reading Borowski made me question what I write about. Next to This Way for The Gas, my work feels insignificant and erasable. But though my life has been blessed with peace and been free of ongoing oppression, I have faced serious challenges and wrenching, painful moments. Borowski taught me that those experiences may be the most important for me as a writer. They will enlarge and deepen my work. The trick is to keep them in my mind and heart each day that I write.

If this review made you want to read the book, pick up a copy of This Way for the Gas, Ladies and Gentlemen from Powell’s Books. Your purchase keeps indie booksellers in business.